Drum beats and chanting followed Justin Trudeau to Delta, B.C., on Sunday, as anti-pipeline protesters attempted to disrupt the prime minister’s speech at a Liberal Party of Canada community barbecue.

Like several other stops on the prime minister’s long weekend trip to B.C., the protesters appeared at a planned appearance by Trudeau with signs and placards denouncing the Trans Mountain pipeline.

Tsleil-Waututh activist William George said he was excited to get access to the event and a chance to voice his opposition to the pipeline directly to the prime minister.

“Most importantly, I’m standing here by myself saying he’s not welcome here and neither is his pipeline,” George said after Trudeau’s speech concluded.

As the prime minister reached the midway point of his address to a crowd of hundreds gathered at the Didar Berry Farm, George began to sing and drum. 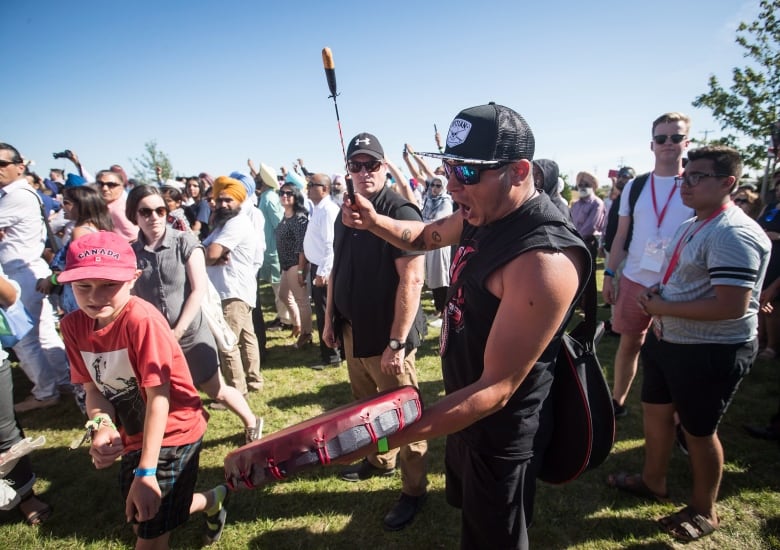 William George, a member of the Tsleil-Waututh First Nation and a guardian at the watch house near Kinder Morgan’s Burnaby facility, drums and sings in protest as the prime minister speaks at at the Liberal Party barbecue in Delta. (Darryl Dyck/Canadian Press)

At one point during George’s demonstration, a woman from the crowd turned around and screamed “shut up” loudly at George.

As George’s demonstration intensified, the prime minister spoke loudly through the microphone and asked the crowd to applaud the Indigenous people who had gathered at the farm 25 kilometres south of Vancouver.

Earlier in the day, the prime minister marched down Robson Street as a raucous crowd of thousands lined the streets for the annual Pride Parade and spoke at a breakfast in Vancouver’s Davie Village hosted by PFLAG Canada.

The prime minister and Foreign Affairs Minister Chrystia Freeland spoke to reporters briefly before joining the parade and said that though there has been a lot of progress made for the LGBTQ community over the past two years, there is still much more to do.

“Its really important to continue to march in Pride. We know that far too many homeless youth are from the LGBT community, we know the rates of teenage suicide is four times as much as in other communities, and eight times as much where the kids don’t have supportive parents,” said the prime minister.

Danny Romandan was marching with the float ahead of Trudeau, and said he was in awe that the prime minister would walk in the parade at all, let alone with him.

He added coming to Canada had allowed him to truly be himself.

“Here I find the prime minister of Canada is marching with me and it’s amazing, and beautiful, and means so much,” said a beaming Romandan before returning to his megaphone and rousing the crowd. 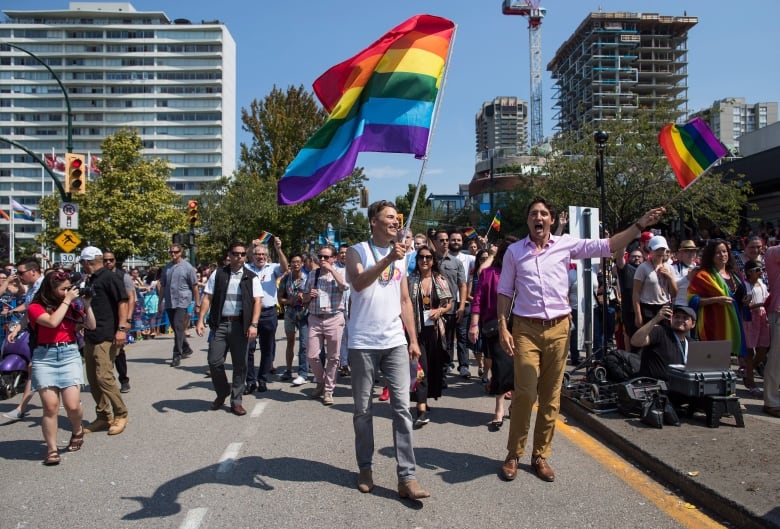 Layla Spies, 15, adorned with two rainbow flags tucked into her hair, a rainbow neckband and strings of coloured beads draped around her neck, said she was excited to see Trudeau walk past her and her mother.

Spies said she thought it was a great sign for progress that the highest member of the Canadian government supports Pride, noting that many places in the world do not tolerate homosexuality.

Trudeau told the audience gathered at the Junction Pub for breakfast that while many places in the world could do with more tolerance, Canada should move beyond simply tolerating the differences in its communities and choose to love them.

“No religion in the world says ‘Tolerate thy neighbour,’ it’s love them, accept them, befriend them,” said Trudeau in front of a rainbow-coloured curtain.

Trudeau commended McKenna and the work PFLAG Canada does across the nation, saying their message of openness, respect, and compassion can impact society in a way the government cannot.

“When you talk about social change, change in families and communities, we need more than just a government saying what you should be doing,” he said.

The prime minister is expected to be in Penticton, B.C., for the B.C. Day Picnic at Gyro Park on Monday.