A Gatineau, Que., couple are safe after experiencing a pair of earthquakes in Indonesia, including a deadly quake Sunday that killed at least 82 people on the popular tourist island of Lombok.

The 7.0-magnitude quake triggered a brief tsunami warning and damaged buildings as far away as the island of Bali, where Alexandria Duchaussoy-Girard and Olivier Hamel had been staying.

They were about 160 kilometres east of the quake’s epicentre when it hit.

Video showed screaming people running in panic from houses in a Bali neighbourhood and vehicles rocking back and forth.

On Lombok, soldiers and other rescuers carried injured people on stretchers and carpets to an evacuation centre.

Everything in their hotel room trembled when the quake struck, said Duchaussoy-Girard, including the windows, the bed, and bottles of water.

“At first, we were scared. We didn’t know what was going on, and we went downstairs as fast as we could,” she said.

She said everyone had spilled out into the streets after the initial tremor. Soon afterwards, they were hit with an aftershock.

The couple wasn’t immediately able to find out more about what was happening because they didn’t have a good internet connection.

All they knew was that the airport was closed.

“It was scary at first, but we’re all OK,” said Duchaussoy-Girard. 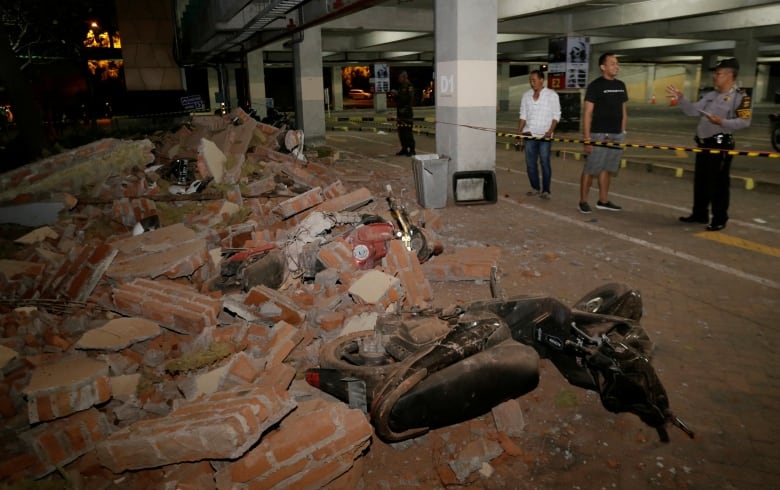 Sunday’s quake was the second fatal earthquake to hit Indonesia in the the past two weeks.

A 6.4-magnitude earthquake struck Lombok on July 29, killing more than a dozen people — and Duchaussoy-Girard and Hamel said they also felt that one.

The couple said they have no plans to cut their Indonesian vacation short, and are hoping they won’t experience more tremors.

As of Sunday afternoon, there were no reports of any Canadian citizens being injured or stuck in the country, according to a spokesperson for Global Affairs Canada.

The federal department is in contact with local authorities and stands ready to provide consular assistance to Canadian citizens if needed.

There are currently 2,221 Canadians in Indonesia, the department said, with 480 registered in Bali.

Global Affairs encourages Canadians to stay connected to the latest travel advice and advisories at travel.gc.ca, on Twitter at @TravelGoC and @CanadaFP, and on Facebook.