Saudi state television also reported Sunday that the Education Ministry was coming up with an “urgent plan” to move thousands of Saudi scholarship students out of Canadian schools to take classes in other countries.

Freeland said students from Saudi Arabia who had  been accepted were still welcome at Canadian schools.

“It would be a shame for those students if they were deprived of the opportunity to study here,” she said.

On Monday, Saudi state airline Saudia said it would suspend flights to and from Toronto as of Aug. 13.

Bessma Momani, an analyst on Middle East affairs and professor at the University of Waterloo, said the move resonates positively among Saudis, but also among the country’s allies in the region.

Momani called it “getting tough on Canada,” which she said other countries in the region might welcome if they view Canadian foreign policy to be led by human rights concerns.

‘We’re not an important country’

There could be a sentiment among allies that, “Finally the Trudeau government is getting poked back in the eye by the Saudis.”

At the same time, it sends a strong message to European and Middle Eastern countries that they shouldn’t “mess” with Saudi Arabia, said Thomas Juneau, a professor at the University of Ottawa.

“There is a clear, uniquely Saudi dimension to this in the sense that in the last three years Saudi Arabia has been behaving very aggressively and assertively in the Middle East,” he said, noting the blockade of Qatar and the war in Yemen.

“For Saudi Arabia to punish Canada, it’s fairly easy because we’re not an important country for them, either are they for us,” he said, noting that it sends a message to others that it will not accept criticism.

“Ensaf is a Canadian citizen, she and her family, therefore merit special attention from the government of Canada and a lot of Canadian civil society has been speaking up for her,” Freeland told the news conference Monday. 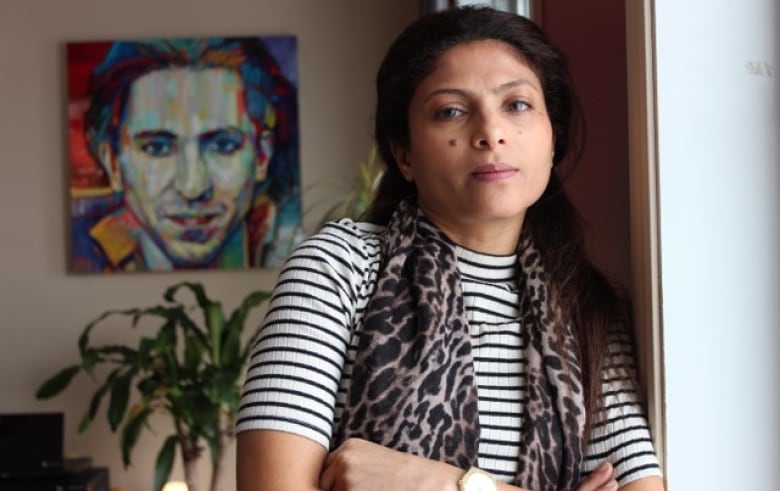 Ensaf Haidar, Raif Badawi’s wife, in her apartment in Sherbrooke, Que. Canada’s call for the release of Badawi and his sister Samar, who are currently imprisoned in Saudi Arabia, may have sparked the recent diplomatic dispute. (Sylvia Thomson/CBC)

In a statement released Monday, Amnesty International called on the broader international community to follow Canada’s lead and stand up for human rights abuses, especially countries with influence in Saudi Arabia such as the U.S., France and the U.K.

“The world cannot continue to look the other way as this relentless persecution of human rights defenders in Saudi Arabia continues. It is now time for other governments to join Canada in increasing the pressure on Saudi Arabia to release all prisoners of conscience immediately and unconditionally, and end the crackdown on freedom of expression in the country,” the statement said.

“We are hoping Canada is setting a precedent now and a model that would have other Western allies support with it, stand with it and support the Saudi crackdown,” she said.

Later Monday, a U.S. State Department official said they had asked the Saudi government for more details on the detention of activists and urged it to respect due process. It marked the first comments by Washington since the dispute erupted between Riyadh and Ottawa.

“We have asked the Government of Saudi Arabia for additional information on the detention of several activists,” a State Department official said in a statement, calling both Saudi Arabia and Canada “close allies.”

“We continue to encourage the Government of Saudi Arabia to respect due process and to publicize information on the status of legal cases,” the official added.

Earlier in the day, Vermont Sen. Bernie Sanders on Twitter called it an “outrageous move” and said that the U.S. should “be clear in condemning repression.”

Regardless of how allies and others are perceiving the measure, it has rallied support among Saudis, said Momani, adding that the Crown Prince of Saudi Arabia has a very young nationalistic base, many of whom have taken to Twitter to celebrate the decision and simultaneously criticize Canada.

Reuters
Previous Article
The Trudeaus received posh gifts at the G7 summit. Can they keep any of them?
Next Article
Blaze displaces 15 people in Hawkesbury, Ont.