The Trudeaus received posh gifts at the G7 summit. Can they keep any of them?

Prime Minister Justin Trudeau was showered with gifts — including fine wine, artwork and a designer silk tie — when he hosted the G7 summit in Quebec last month.

Amid the high tensions over trade and tariffs that dominated the talks, Trudeau and wife Sophie Gré​goire-Trudeau received 15 tokens of diplomatic appreciation for welcoming the world leaders in Charlevoix.

The list of the gifts exchanged is being made public just as Ethics and Conflict of Interest Commissioner Mario Dion is signalling that he’s going to take a harder line than his predecessor did on what federal office-holders can — and can’t — keep.

Following the long-standing tradition of diplomatic gift exchanges, Trudeau reciprocated, offering the leaders, their spouses and senior officials gifts of sculpture, stained glass artwork and boxes made of Labradorite and forged metals crafted by local artists.

The gifts declared to date, which recently were posted on the federal ethics commissioner’s website and first reported by La Presse, include:

According to the Conflict of Interest Act, public officers must declare all gifts worth more than $200. If the value exceeds $1,000, the gift must be forfeited to the Crown unless it is cleared by the ethics commissioner.

Ethics and Conflict of Interest Commissioner Mario Dion, who took the post in December 2017, said his predecessor Mary Dawson allowed prime ministers and other office-holders to, on some occasions, retain expensive gifts and reimburse the value in excess of $1,000.

“I would not be inclined to do the same thing,” he told CBC News. “I am not ruling out the possibility that one day, for instance, if there was a sentimental value attached to the gift or something of this nature, but that would not be my normal course of action.

“There is a lot of discretion given to the commissioner, so what Mary Dawson has done sometimes is different than what I will do, depending on my reading of the act, and the spirit of the act as well.”

Trudeau kept a bike from China

Trudeau has kept items worth more than $1,000 twice since taking office in 2015.

In 2016, he kept a LETV smart bicycle given by Li Keqiang, premier of the State Council of China, during the G20 summit. Last year he kept an unframed, limited-edition etching by Inuit artist Annie Pootoogook. The amount that was reimbursed is not public.

Democracy Watch co-founder Duff Conacher said his interpretation of the rules is that a prime minister should not be permitted to keep expensive gifts simply by paying the excess value. Determinations by the commissioner’s office in the past have essentially “gutted” the rules, he said.

“I don’t want there even to be a perception that they’ve made a decision because they’ve received a valuable gift from a foreign official, and I think a gift of that value creates that perception,” he said.

“It says ‘forfeited’ for a reason. It doesn’t say ‘keep it for a discount’.”

Items with short shelf-lives, or personal items such as scarves, purses, watches or pens, can be put up for government auction. In some cases, items are donated or destroyed.

During the G7 summit, Trudeau gave Trump a framed photograph of the hotel the president’s grandfather once operated in Bennett, B.C.

The gift was praised as a “great moment” between the two leaders by Trump’s spokeswoman Sarah Sanders, who tweeted a picture of the event. But it quickly led to embarrassment when social media buzzed that the hotel was also operated as a brothel. 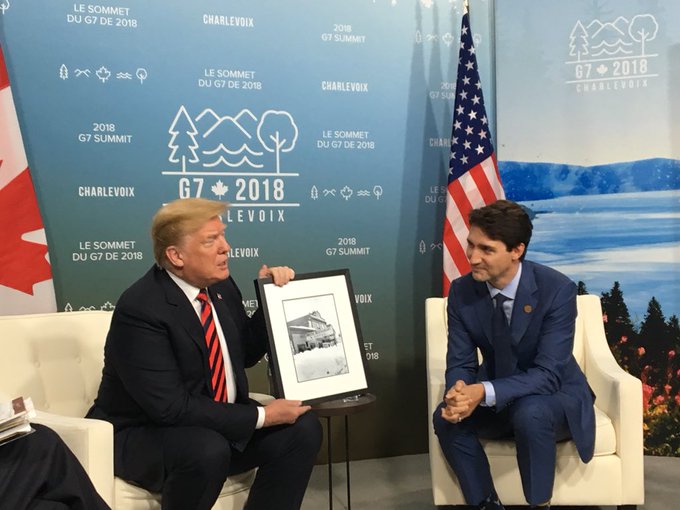 Penny Collenette, a law professor at University of Ottawa and a former Liberal PMO adviser, said offering charitable donations could be a better alternative to the usual gift exchange at these events. She said former prime minister Jean Chrétien donated Inuit artwork as a way of promoting Canadian culture.

“It helped to put Inuit art on the world stage,” she said. “In that way, if a prime minister is picking something that represents our culture or something we want to have profiled, then it’s probably worth it.

“If it’s just some kind of an exchange of items, then it’s kind of a waste of time.